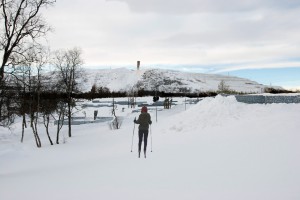 After four years of development, presentations and re-designs, the first phase of the park realization is scheduled for August 2015.

Gruvstadsparken is a new park for the mining city Kiruna in the very north of Sweden. The iron ore mine in Kiruna is the most efficient and prosperous one in Europe. A consequence of the extensive excavation are cracks appearing on the surface and as a result, half of the city needs to be relocated within the next 25 years. The buffer zone between the erosion areas of the mine and the city will be in permanent flux, still accessible for people but not anymore suitable for housing or traffic.

For this zone, we – Ingo Vetter, Sofia Sundberg & Karl Tuikkanen – developed a park concept, which is based on the transformation process, re-uses all demolition waste, as well as remaining infrastructure. The concept actively deals with questions of identity, history and memory. In the first phase of realization a former residential area of 3 ha will be dismantled and rebuild as a geometric structure out of gabions filled with bricks and concrete from the demolished houses. The structures will be open to the public until the erosion zone reaches the area. Thereafter, a fence forecloses the park use, but the structures will still be visible for decades. Gradually 64 ha of city space will be transformed in a second phase. Hence, the park will be rather a time-based condition than a fixed space.

The opening of the first part of Gruvstadsparken will be in November 2015.

More information at the homepage of Statens Konstråd